The Meaning of Rosh Hashanah 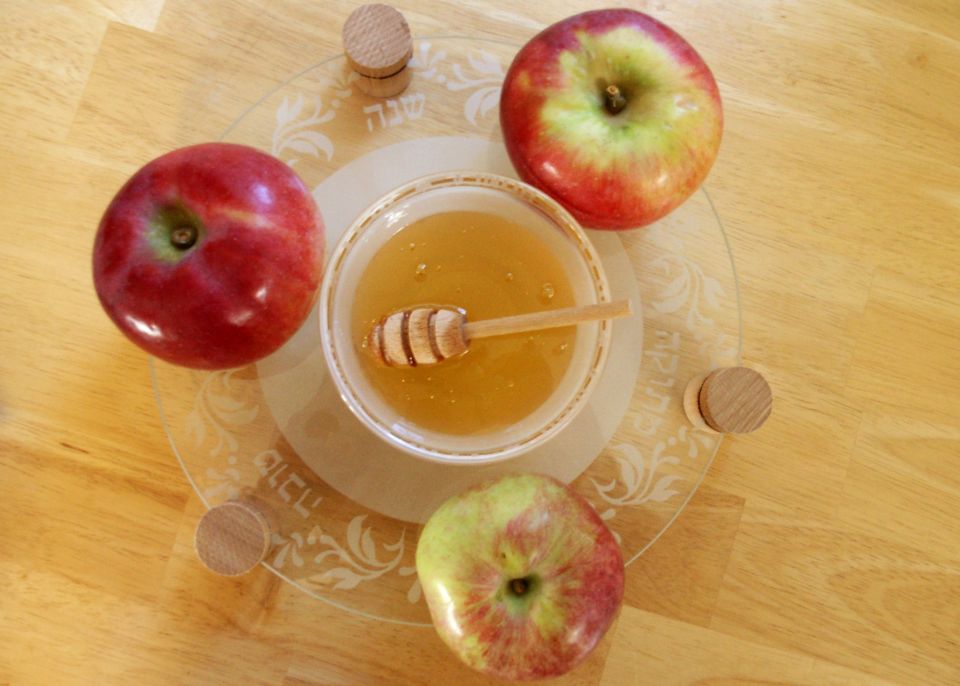 Rosh Hashanah (the “beginning” or “head” of “the year”) is the Jewish New Year, celebrated on the 1st of Tishrei (September-October) each year. As with all Jewish holidays, understanding  its complete meaning requires understanding the law of root and branch by which spiritual causes precede their corporeal consequences.

According to the spiritual roots, Rosh Hashana marks the creation of the soul of Adam HaRishon (lit. “The First Man”). The soul of Adam HaRishon is the root of every person’s soul. It is where we, humanity, exist in complete unification, perfectly and harmoniously, with the higher force of bestowal and love permeating our connection to each other.

The soul of Adam HaRishon is both where we are all from and where we are all headed. The environment (called “the upper world” or “the spiritual world”) for this soul’s existence was created in the five days leading up to Rosh Hashana, and on the fifth hour of the Friday, the soul of Adam HaRishon was created. The word “Adam” means “similarity” (“Domeh”) to the higher force of bestowal and love, as the unity of all our souls in a harmonious whole is possible only through the revelation of this force of bestowal and love between us.

Through various actions, we became separated from our root, causal state of Adam HaRishon to our current branch state, called “our world” or “this world,” which we now experience. This took place in order for us to: 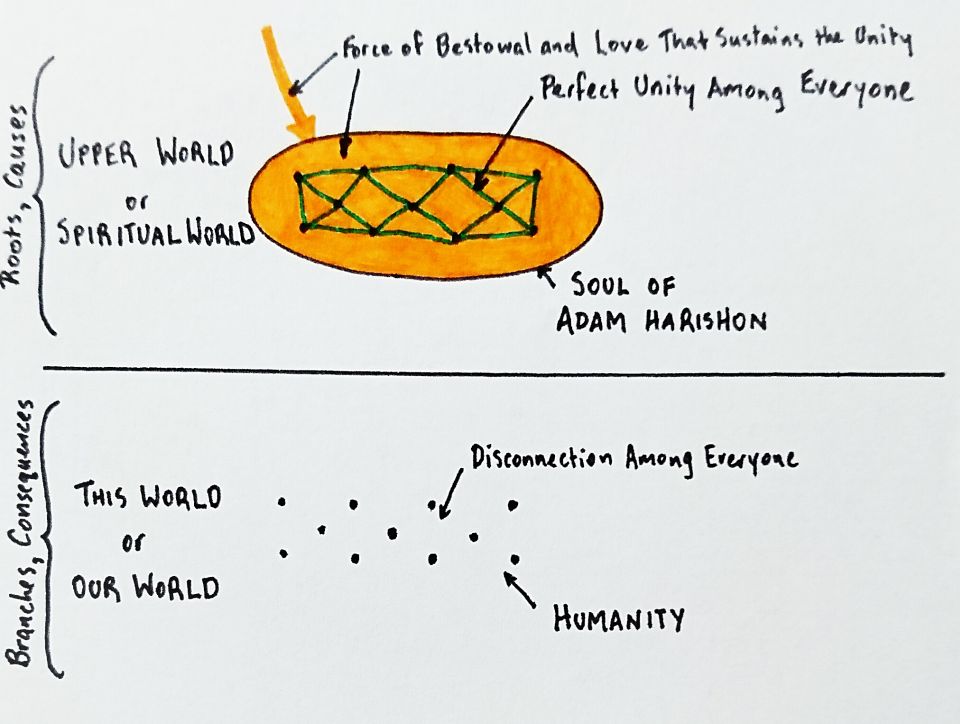 While living in our world, we identify Rosh Hashanah as the day when a man in this world underwent that transformation, and discovered the perfection of the upper world. It took place on the 1st of Tishrei (September-October), 5,778 years ago. This was a man who, like many of us, asked about the meaning and purpose of life. However, instead of brushing this question aside, he devotedly sought its true answer and wouldn’t stop investigating until he discovered it. This man was also given the name, “Adam HaRishon,” due to being the first man known to humanity who made that transition, and who also wrote a book of his discoveries.

Therefore, Rosh Hashanah signifies the beginning of change. It involves undergoing an introspection of our attitude in the previous year in relation to the attitude of bestowal and love that exists among us in our root and goal state—the soul of Adam HaRishon: a state of connection, love of others as ourselves, and not to do to others what we hate done to ourselves.

Rosh Hashanah is an opportunity to perform this self-examination and change. The implications of this process are far reaching, and can make the difference between individuals and society living a life of suffering, insecurity and emptiness and a life of happiness, confidence and fulfillment.

The Meaning of Rosh Hashanah in Today’s Modern World

Today’s world is on the brink of a major transformation. We face several challenges that are concentrating into a complete revision of how we live our lives.

Rosh Hashanah signifies the beginning of change. The word “year” [“Shana”] in Hebrew, stems from the same root as the word for “change” [“Shinui”]. Rosh Hashanah relates just as much to the ability to change today’s insecure global direction to a harmonious one.

What then can we look forward to in the coming year, i.e. in the change that we can implement?

How can we make the new year one where we enable a change of course, to guide all of the above-mentioned challenges in a positive direction?

A happy new year is possible if we recognize that our current year, i.e. our current state, is not such a happy one. The increasing problems we’re experiencing awaken introspection in more and more people, to realize that the current path we’re treading on is not leading us to any better place. This is a very important step in our development.

Such introspection is leading more and more people to the conclusion that our lives need to be reorganized so that we can develop with the least amount of pain.

To do so, our goal for the coming year should be no less than to unite harmoniously as a single system, like how we’re united in our root state of the soul of Adam HaRishon: to connect with people and fulfill their desires.

Gradually, the increasing challenges mentioned above awaken in us the feeling that we depend on each other, and if we don’t unite above our differences, we will continue feeling increasing pains until we’ll realize that we have no other choice but to learn how we can unite.

A Happy New Year (“Shana Tova”) is one in which we will unite and feel the force of bestowal and love in our unity.

Once we recognize our current state as leading to a dead end, we will realize that we need to unite, and to do so, we’ll need the force of love and bestowal to enter among our connections. This realization is what Rosh Hashanah is all about.

The Meaning of Rosh Hashanah for an Individual

Today is the New Year, a time of judgment: if a person aspires to unity, i.e. to correcting the soul of “Adam,” its purpose is justified

As we wish each other a “Happy New Year” and “Shana Tova” during Rosh Hashanah, it’s a perfect time to look deeper into what it really takes to make the upcoming year a happy and good one.

Rosh Hashanah thus becomes a developmental phase on the way to the correction of this egoism inside each one of us. The holiday’s customs (described below) replicate actions of this correction of egoism.

The meaning of Rosh Hashanah for an individual is that it’s the time for the recognition of our egoistic nature as holding us back, and to ignite the desire to change our Rosh (“head”)—instead of having the egoistic force of self-reception guide our every action, thought and desire, we want to instead have the altruistic force of bestowal and love enter our lives and guide our motions to a harmonious and happy outcome.

The Meaning of Rosh Hashanah for Society

How can we accelerate the process of realizing our egoistic human nature as holding us back from a better life, and grow our desire to positively connect above our egoism?

The answer is in one word: society.

By being a member of a society that praises and appreciates values of connection, giving and love, the social support for those values would motivate us to undergo this transformation much faster and more smoothly.

It is not easy to prefer connection, giving and love of others over avoiding this connection, and closing ourselves off from others. Our entire nature is against connection. Therefore, the more we see positive examples in society of people making efforts to unite, the more this will support our own introspection, and help accelerate our awareness of our egoistic nature as an interference to living happy lives together, and awaken our desire to work on our connection.

As mentioned above, this point of introspection is what Rosh Hashanah is all about: It’s the beginning of changing ourselves from being egoistically detached from each other to being positively connected.

Moreover, Rosh Hashanah is a state that we can experience at moment of our lives. It’s the state where we make that decision of starting that transformation within ourselves.

The Meaning of Rosh Hashanah for the Jewish People

How does the holiday of Rosh Hashanah relate to the Jewish people?

The Jewish people were born from a special feeling of connection. Abraham the Patriarch took the amorphous concept that Adam HaRishon initiated, and developed it into a method of human connection, with the revelation of the force of love and bestowal sustaining those connections.

Moreover, Abraham formed groups who implemented the method. Those groups became known as the Jews.

The fundamental principle that united the Jewish people became known as “love your friend as yourself.” It is the essential foundation for the existence of the Jews. The ability of the Jewish people to rise above their egoism and discover relations of unity, equality and mutual responsibility is what defined the Jews who implemented Abraham’s method.

Incidentally, this is what the world expects from the Jews. Although Jews excel in many fields, science, literature, art, and medicine to name a few, the principal uniqueness of the Jews is in the root of what makes them Jews: to reach unity above their egoism, and by so doing, provide an example of this unity to the world, to be “a light for the nations” (the Hebrew word for “Jew” [Yehudi] comes from the word for “united” [yihudi] [Yaarot Devash, Part 2, Drush no. 2]).

The Jews are the hubs in humanity’s network, a critical mass that the unity of humanity as a whole depends on. The more the Jews delay this work on pioneering humanity’s unity, the more chaos and suffering will spread around the world. Likewise, people will instinctively feel that the Jews are to blame for their problems. This is the deep rooted cause of anti-Semitism.

However, if the Jewish people start working on their unity, they will will bring harmony and happiness to the world. They will also be freed from anti-Semitism and will be respected to the extent they are hated today.

Therefore, this holiday is about initiating that much needed change: a change in our relations that leads to a change in our feelings as individuals and as a society. This decision to change is how Adam HaRishon began and how Abraham developed, and is relevant to the same degree and perhaps even more for us today as well.

Let us then hope that this year will truly be a year of change, a year of creating positive connections among each other, a year of “love your friend as yourself,” of unity that will transform our lives to a positive direction and make the upcoming year a happy one.

The Meaning of the Selichot Preceding Rosh Hashanah 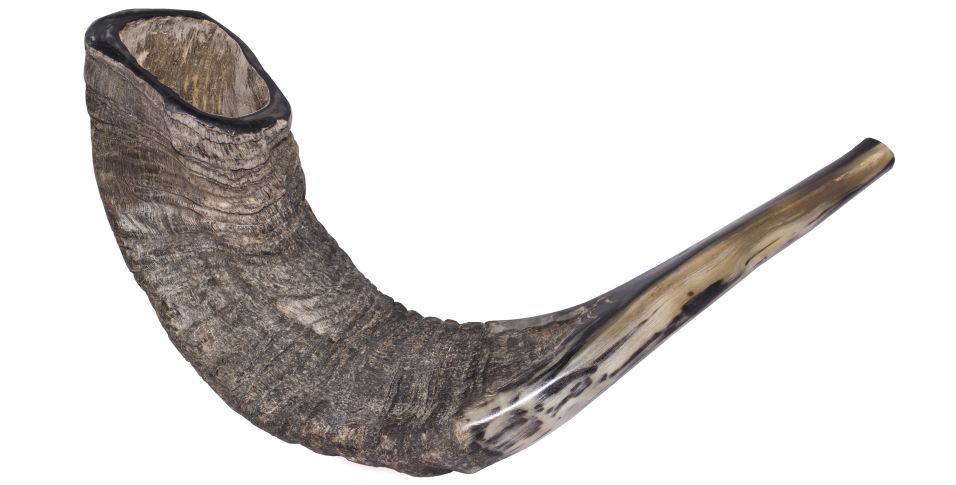 The prayer said on the Jewish New Year mentions three conditions of ascending to the spiritual level called the New Year:

What does this mean?

The Meaning of Dipping Apples in Honey on Rosh Hashanah

The key to a happy and sweet new year is how we use our innate desire to enjoy: whether we use it for our personal benefit, egoistically, or for the benefit of others, to connect with them.

The Meaning of Eating Fish Heads on Rosh Hashanah

The custom of eating fish heads on Rosh Hashanah, and the saying “may we be the head and not the tail” means that we should not follow our egoistic inclinations (“the tail”), but our head. Moreover, our head, i.e. our guiding intentions, should be aimed at reaching love, bestowal and connection among each other.

The Meaning of the Pomegranate That Is Eaten on Rosh Hashanah

The pomegranate with its many juicy seeds symbolizes that we are currently like those seeds, i.e. while we still haven’t yet discovered our complete connection to each other, and now the time has come for us to “ripen,” i.e. to nurture and develop positive connections.

Also, in relation to the saying, “That our rights should be many as a pomegranate,” the word for “rights” (“Zechuyot”) stems from the root for “purity” (“Zakut”). It refers to the purification of our egoistic human nature via our aim to achieve love and connection in our thoughts and deeds.

The Meaning of the Jewish Holidays Series