Creating Media About What Is Happening To People 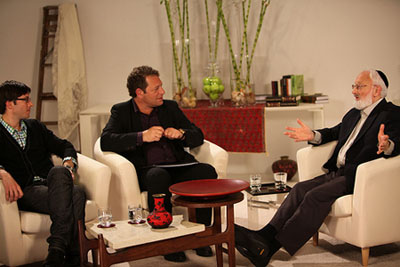 Alex Jablonsky: One of the things that we're having now is that it's almost as if the bad news for the last eight to ten years has been so consistent, and this drumbeat, whether it's with the terrorist attacks here or with the wars that our country has been involved in, and now people are then seeing their own economic house fall apart. It's almost as if you can't escape from it anymore.

What happens is that if you are sitting in a room with one snake for a day, you can kind of ignore it, and you can be in the other corner and you can be on the couch or you can put a blanket over it. But if you're in a room with fifty snakes for fifty days, you're going to have to start to learn how to face them and how to live with them. I think that that is exactly what's going on. There are so many problems that now people are saying, "Well wait a sec., I can't just shut off my mind from this; I can't shut off my mind from any of these questions. I want to start looking at this stuff." What would you tell me; what would you tell the individual?

Michael Laitman: To you personally, I would say this: In front of you, with your talent and with your young life and energy that you have, and your professionalism, I think you can make a beautiful impact on humanity by creating a media about what is happening to them.

Alex Jablonsky: But I'm saying, I'm saying, I don't understand this interconnectedness in my own life on a daily basis, yet. I don't! What I am saying is that for me, in my day-to-day existence, I understand the things that I'm viscerally, immediately, and in an immediate space connected to. Do you think it's a spiritual practice? Do you think it's a kind of broader understanding of the world? I'm saying what is it that an individual can do to make this understanding complete?

Michael Laitman: No, I'm speaking about it from the perspective of science. There is no spirituality here. I am an expert in cybernetics, which is a science of systems, systems of government, of management. And out of these systems, when we study a closed system where all the parts are like cogwheels all connected and tied to each other, a wheel can't move however it wants. You can't turn yourself only with respect to your kin. You have to move with the whole system, the global one. That's the meaning of being in a global crisis, meaning we have a global plight. We are all connected, but we can't get along. We're stopping; all like wheels stopping the others. We are stopping each other from moving, and everyone is affecting, in this way, everyone else. So how do we move in harmony? That's our problem.

That's the regulator; this is the valve that we want to find, the regulator we want to find. The crisis isn't just in economy; it's in culture, in education, in science, in family life, with drugs and depression. In every area of human engagement there's a crisis and it's all because of this lack of right connections between us.

Alex Jablonsky: Here's a kind of broader question which is to you in seeing these problems that we're talking about, what do you think the responsibility is of the artist, of the filmmaker, of the poet, of the writer?

Michael Laitman: To feel the pain of the world, and out of the pain to get to the reason why it's happening. An artist has to be a seer more than everyone, farther than everyone. Through his creation, he should explain to the world where the world is standing, a kind of tragedy, and the reason for the situation, and what could be the solution and how to approach it. He has to open up this scene of human drama.

Alex Jablonsky: One of the things that's interesting to me about this idea, that we're in an increasingly narcissistic culture, which I think is truth, is the way that technology plays into it. Because at this point, particularly for kids who are like 16, 17, 18, you can wake up in the morning and be the kind of the star in the film of your own life from morning till night, which is: You are on your Facebook page where it's about you; you're using Twitter to tell everyone in the world what you are doing, and you're putting things on YouTube about yourself, that it seems like it's almost becoming a one-way dialogue with the world, which is from the individual out. It's like anything else; when you're talking you can't listen.

Michael Laitman: Well yes, that's why we build technology this way, because technology is a result of our egos. It's true that today people don't have to leave their rooms and they think they're at the top of the world.

Alex Jablonsky: What I would say is I think that what we're talking about, because I do think these things do allow for connection, but I think what the question is, is the quality of the connection.

Host: Do you feel, Dr. Laitman, that there's a way the new media, the Internet, the films, things people are doing on the Internet can bring people to a better connection? Or is it always going to be superficial?

Michael Laitman: No, films I think are the only thing that can help here. The Internet is a tool; it's a tool of presentation to put something up there so you can watch it. Because in itself, it's heartless. The Internet doesn't have anything in and of itself, especially since it is bloated; people upload all kinds of stuff over there. But the films that will talk about the right connection between people, that will point to the fact that through it we can resolve the crisis in family, in our relationships with our children, with the environment. We're also about to face a serious ecological problem. We're anxious about what's going to happen. Who knows in a year or two what is going to happen? If we can resolve the problem of our connections, by that we resolve all these problems.

Host: Alex, your latest project is What Narcissism Means to Me.

Michael Laitman: Beautiful topic for a film. Narcissism is truly the core of the problems. It is the point that the world is now revolving around.

Alex Jablonsky: The title comes about because of this kind of belief in modern psychology; there is such a thing as narcissistic wounds where people can become so focused on themselves that the world becomes almost too painful because the rest of the world is not focused on them.