The Highest Form Of Human Engagement 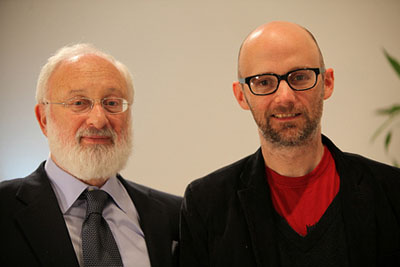 Host: I read that you said that you're bothered very much by suffering, suffering on all levels, whether it's animals, or people, or civilizations.

Moby: It's the one thing that is avoidable, you know. I mean death is unavoidable, so the truth is, I work a lot with animal welfare, and as odd as this might sound, an animal dying bothers me less than an animal suffering needlessly because death, as far as we know, is the cessation of suffering. A lot of my ethical perspective on the world, a lot of the way I engage with the world is based on the Golden Rule: "Do unto others as you would have them do unto you." And so I try to imagine myself in other people's positions, or even other animals' positions, where if I were a cow, I would rather be a dead cow than a suffering cow. If the choice is a week of suffering followed by death or death right now, I'd rather choose death right now.

Michael Laitman: What do you think about the human element in terms of its causing the suffering that you so want to avoid?

Host: Dr. Laitman I would actually like to have you to answer the same question.

Michael Laitman: Kabbalah says we have to correct man, each and every person, and especially today because now we are in a global, integral situation where everyone is connected. The connection between all people is now surfacing, and all of a sudden it's become like we're all clutched together, tied together, and we are unprepared, and we don't want to be connected.

Moby has said correctly, "I don't like people touching me." Everyone is like that; that's what we feel inside. I don't want to be touched on the one hand, but on the other hand, we have no choice. Millions touch me today and I don't know where to run. And here lies a problem because I have to come to a state where I will love being touched. It's a problem; it's against our nature. It's very hard.

Host: Moby, how do you see this concept of us being all in one system and all connected that Kabbalah brings forth?

Moby: I think it makes perfect sense. The things that separate people are based on fear and are artificial. And I do agree that what you are saying about humans need to be corrected. We need, from my perspective, we need to evolve.

Host: I do think it's a question of evolution. And Dr. Laitman, we talked about the fact that humans need to be corrected. How do you correct these people? How did they evolve? What's the next step in human evolution that I think a lot of us are feeling right now?

Michael Laitman: I think, first of all, people need to understand that without advancing, we won't advance toward anything good. The crisis will not go away if we don't correct ourselves. We are standing opposite nature, and further and further blows are looming. Scientists are talking about plagues and natural disasters like hurricanes, tsunamis, earthquakes, and cooling and heating, and whatnot that we are being terrified with, all kinds of things.

But it is justified. It's true, and I think, at least according to Kabbalah and what I learned in the last thirty years, the bad that we can see coming from nature, these blows are what we're causing by our bad relationships and bad attitude. Because when we among ourselves are hateful toward each other, and are repelling each other, and inconsiderate of each other, with our thoughts and our desires, we are creating the biggest imbalance.

It seems like what you're describing when you talk about natural order and energy, as it were, and we can either fight against it, in which case, disease comes as a result, whether it is personal disease, spiritual disease, cultural disease, or we make ourselves open to this energy that you're describing. We become a part of it, and become a vehicle for it, and then health is what results.

And with music, I mean music to me, what's remarkable about music is it does not exist; you cannot touch it. You can touch a CD, you can touch....

Host: It's not tangible in that way.

And for me that's why music often times is the embodiment of spirit because spirit, also you can't touch it. And it drives us, as humans, it drives us crazy because we like things we can touch. I like being able to say "chair" and "shoe" and "fake apple." There's comfort in identifying and labeling, but the universe cannot be identified; the universe cannot be labeled.

Host: Would you care to comment about that specific part of what he said? Do you believe the universe can't be identified?

Michael Laitman: Moby's right in that music, of all human engagements, of all that we build and create in our world, music is the most spiritual. It is the most sublime. It's something really existing not even in sounds because there are no sounds. There's a kind of special harmony to it that exists in nature beyond the sounds. When we perceive a little bit of that harmony and clothe it in notes and kind of drink a tiny sip of it, it's truly beyond and above any corporeal expression, beyond frequencies.

Kabbalah explains where these forces come from, how I perceive them, why I understand them the way I do, why through all kinds of means and pretty limited means I create those sounds that I hear; not in my ear. But before we can visualize music within us, there is a kind of program, a harmony that is depicted in our brain regardless of our hearing, regardless of notes, of sounds. And we process it down to notes, down to certain sounds, in a certain order that is bounded by time and movement, and we turn it into music. But before that, it's something that exists on a degree that is above us.

The wisdom of Kabbalah explains that sublime harmony, the higher harmony before we touch it. That's why there's a root here, a much higher root here to be impressed with.

And afterwards, too, when you listen to the music, we don't know how it affects us; but it's as if it goes back to that root. It's as if we get it from Above to send it to all people, and from us it goes back up to the root of that Godly harmony from which it came. That's what Kabbalah explains about the essence of music. That's why it is an expression in our world of emotions and relationships that is higher than any other human engagement.