Goal-Setting & Fixing The Connections Among People 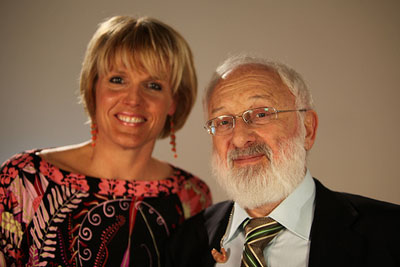 Caroline Adams Miller: Thank you for having me.

Host: What's the connection between goals, setting goals for people, aiming at goals, and happiness? What does that do for us?

Caroline Adams Miller: The connection between goal setting, and goal pursuit, and happiness is the happiest people wake up every day with clear-cut goals, both short-term and long-term. If I find that I can teach people how to set the right goals, I can add to the tonnage of happiness in the world, and that's what I do professionally with clients all over the world right now. So the happiest people have clear-cut goals, and happy people have feelings of self-efficacy, which means that they believe they can do the things that they want to do; and that's something I work with people on very closely. As far as I know, my book is the first one to connect the science of these two areas of human motivation, and it's just a delightful niche to be in.

Host: Can people just work on their own goals and their own happiness, or do their goals have to be broader than just, sort of, aimed at themselves?

Caroline Adams Miller: Well, when people are pursuing happiness, they aren't necessarily pursuing happiness for themselves per se. Sometimes they're pursuing hobbies that are intrinsically rewarding, that put them in a state of flow. Gratitude can be a goal, to be more grateful, to say, "thank you" to people who are important to you.

Host: What happens at a time when you can start setting goals, but the world around you is completely changed, and the ground on which all of these things, the targets that you set, start moving, and we're in a situation like we are today, where we are really in a crisis? What's going on with people? What are we feeling now? What is it that is causing the problem that we're seeing on a very wide, on a global basis?

Caroline Adams Miller: Well, I think part of the problem is people are too focused on their own little world, their own little lives, what it is they want to accomplish. When, in fact, there is really nothing you can accomplish that feels quite as happy as doing it with other people. So really what we have is too many people not joining bowling leagues, too many people not knowing the names of their neighbors, too many people not reaching out and giving a helping hand. So when I work with people on their goals, that's a key piece of what I know will bring them joy, and I encourage them to look at that part of their lives.

Host: If you were to identify a goal in terms of reaching happiness, from the point-of-view of the method of Kabbalah, what would you say that the goal is, and how would we possibly get to that goal?

Michael Laitman: The goal should be for all people, if they truly are connected as one organism, and this is what we're discovering now; we're discovering that nature is global, that the connection between all the parts has to be harmonious, completely so, and that our growth promotes us toward it among ourselves, and that we have to connect in a uniform way to the inanimate, the vegetative, and animal because everything is one.

So it turns out that we have to transcend our egos and build ourselves in the opposite way to our current structure, where we all want to exploit others and gain at the expense of everyone else; that according to our nature, we just want to see ourselves greater than others. Now instead, we have to see ourselves as one, equal, like a family where one cannot be happy if the other is miserable. And to bring this awareness to people is the main goal.

Now, again, I'm saying it's only the first stage, this awareness. Stage two is how do we build an environment that helps each person by affecting us to transcend our own evil and achieve this love: "Love thy neighbor as thyself," basically love of others?

Caroline Adams Miller: I completely agree with you, the lack of connection between people causes all the sadness in the world; no question about it.

Michael Laitman: But in general, do they have any awareness that the crisis is caused by lack of the right connection between people?

Caroline Adams Miller: You know I don't know that people are always aware of it until you ask powerful questions. And if you ask powerful questions, you will receive those Eureka moments where people suddenly understand that they're cut off from their friends or maybe they don't even have four friends. Four friends is the tipping point; you don't want to have three; you want to have four. And so when you ask people: Who is happy for you when good things happen; or who can you call at 2:00 in the morning when something happens to you? Sometimes people are really sad to realize that they haven't cultivated that, and that's how they have an aha moment.

Michael Laitman: So you teach them that specifically through the good connection between people, is where you find true happiness?

Caroline Adams Miller: What has increasingly been found is that the happiest people have vibrant social networks; they work hard at cultivating relationships with other people. So it's the togetherness, the bringing people together that brings people the most joy.

Michael Laitman: So, it's a result.

Caroline Adams Miller: It's a result

Michael Laitman: Do I need to connect to people? And what if I have a hard time doing that because of my nature? I'm looking for a tip.

Caroline Adams Miller: I love this question because one of the things that's been discovered is people are hard-wired to be introverted or extroverted, for example. And one of the four traits of happy people is extroversion. So the question arises: What if you are not naturally wired to be an extrovert? Well, the studies find you can pretend to be extroverted and get all of the benefits that natural extroverts gain. So, in some ways you force yourself to distract yourself from your own preoccupations and your own ruminations, and go out and connect with other people. And if you are not wired to do that, you can still override that tendency and become a connector, even if you don't feel naturally wired to do so, and it doesn't come easily to you.

Host: Being around other people can really shape a person beyond their own nature?

Caroline Adams Miller: Well, this is great information; there is new research out of Harvard Medical School about social contagion. I think it's kind of obvious and intuitive that you catch the moods of people around you, but now they're finding that people get fat in groups, they get happy in groups, they quit smoking in groups. And I think this is one of the most unstudied factors in goal accomplishment, which is you become who you spend time with. So you really have to take a look at not just what do I want to do, but who is closest to me, who matters in my life because that's who you will become.

Michael Laitman: They cannot be different because their societies compel them to be that way.

So on an intuitive level, children do understand what it is that brings them joy, but sometimes they have to find out the hard way.

There was a wonderful movie called Into the Wild that Sean Penn directed. At the end, the hero dies in the back of a bus; he had fled into the wilds of Alaska; it's a bestselling book. And as he is dying, he writes one message to his family, which is: "Happiness is best when shared with others." And that's really what he discovered after this long odyssey of trying to find inner joy, is that it was worthless unless he was with people.

Michael Laitman: I think that people like Caroline and others that I am meeting in this visit, I really didn't expect to find so much awareness of it, and so clear: The global crisis that now we're all experiencing is because of our inappropriate connections. But it's not enough to know that we have an inappropriate connection, we also have to come to a state where we correct it.

In the end, we see that nature is compelling us to connect among ourselves in a positive and tight form, complementing each other like a single organism, like cells in an organism where each works only to complement the work of the whole body. Eventually, we're all going to have to acknowledge the fact that we must all compliment the human community, and in this harmonious way, reciprocal way, we're going to have to work.