Film & Storytelling In The Global Era 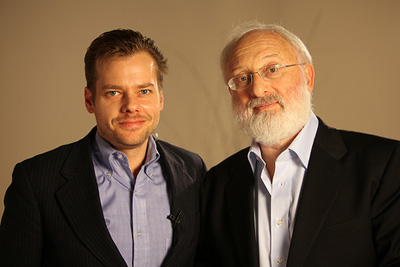 Michael Laitman: From what you see and your knowledge of the filmmaking empire in America, are other people going to do films about the crisis, why it happened, how people are reacting to it, or is it still too early now and it hasn't settled down yet, settled in? Or maybe it's not interesting enough to the public. Maybe there are not enough artists who feel like philosophers, like thinkers, people who can really process it, who know how to really present it.

Michael Laitman: Well, to be honest, I'm dreaming of a film like that. It doesn't have to be a full-fledged feature, but it's got to be something that tells humanity where we are, because this is a special crisis. It's unprecedented. All the previous crises, in general or history, happened through the evolution of our ego and as our egos have grown from generation to generation, from era to era, and prompted us to evolve technologically in education and in science.

But today we're in a situation that besides the growth of our egos, they've actually stopped growing, and we've come to a point where we cannot continue. We have nothing more to chase. It's as if it's to the contrary: The ego is closing us in instead of growing. It's closing us in together and humanity is beginning to feel that it's kind of closed in a small village, in a global village; everyone integrated and locked together. And here we're falling under a new law, a law of mutual guarantee, of mutual connectedness.

So, all of our previous tools that we used to somehow govern our lives, don't work today. That's because now people, first of all, have to stop and think about their relationships and how to fix them, so it matches this integral law under which we are. And until we know how to cope with the new conditions of being all connected, we won't resolve the crisis.

We know that today is a new era. It's a new world, and now the world must discover its interconnectedness, and start being mutually considerate, and even in a state of loving each other, and that will create a new level of life for us.

Josh Zeman: It feels like we are at a precipice of that connectivity. We were almost forced to the edge of the cliff by what's happened in the world, but also, technology has brought us to this. We couldn't be any more connected, theoretically, as a society than we are now. Yet, at the same point, we feel we're at the precipice of this dis-connectivity, this lack of whether it's true relationships, whether those relationships are real. So, my point and my question is, is it almost a function of: Is it a good thing, because we're here now and we're forced to make a decision? Is this technology helping us? Or there are those that believe that this world, this global connectivity - Facebook and emails, and everything like that - were so quickly brought together so much and now we're forced to really deal with each other as human beings.

Michael Laitman: Why is it a bad thing? It's a good thing.

Josh Zeman: But now, I've never had the opportunity with which to spread that message to five hundred of my friends through the single typing of, through a single, one piece of communication. We go back to storytelling; maybe in a very specific way, I can put a movie out there and give a message, and it actually sits for a thousand people; in that one moment they get that message, and we're all interconnected in that moment. And that's obviously what's so very satisfying about that if they're accepting my message and my message is good. But also now, we finally have the keys, the tools, with which to do everything that you're saying.

But there's those people you can tell they only use that communication tool for the most consumerist viewpoints or for the most like big.... They don't use it like; it's about social parties and things like that, and they don't use it for real connectivity. I think it's interesting because now, through technology, we have the ability to do it, but we just have to understand that we can't use it for the little things. We have to use it for the real connection.

Michael Laitman: We can see that people in themselves don't do anything; there's nothing free about us. We don't act according to our own will. It's all a result of things that happen through internal drives. What we can, however, do, is in our free choice, which is in building around each person the right environment, the right society that can affect us from the outside, and by that people change. People by themselves cannot change themselves. That's why I have such great respect for your profession because today the video arts, the visual arts, this media is the most important; it is the most influential. It can do wonders in the world. So let's hope that at some point, we will be making such films that explain to people what needs to be done to be happy.

Josh Zeman: As the American public - many of us, not all of us, of course - were upset about the war in Iraq and what had happened and how it went down. Hollywood has made some movies that maybe showed where some of the complications of that war and how it was purported to have happened and everything like that, but everybody's so angry and they made these films, yet why didn't they perform well in the box office? What does that mean about us as a culture? The idea was that Americans felt very bad about what happened; they don't need to be reminded of how they were led into something that they didn't want.

Ultimately some people are going for escapism and they don't want to be reminded. And that's why war films about Iraq, now, don't do well, even though we're still there. While you can do a Vietnam film; now, it's very popular, but then it's been thirty years since what happened.

Michael Laitman: Well, look. With the ecological crisis, everyone made films about it, Al Gore and whatnot. The drug crisis, well, I don't know so much about that industry, but I'm sure there are enough films about that.

Josh Zeman: Well, I think they don't try to understand something until they realize that they're in it, and then by the time you want to purport to give them the advice, unfortunately, they've already had to make those quick choices. So as storytellers, I think what you really want to try and do is do it beforehand. Somehow do it without it being relatable to the issue at hand and that's why things like metaphor in films work so well. You make a film about child abuse, but it's not really about child abuse, it's about the breakdown of the family. We do these very small examples, which are much bigger examples, and that's how we're trying educate. Sometimes we can go directly to the source, but a lot of times people don't want to learn like that.

Host: As an activist, in film, do we need to tell a different story that makes us understand a new period? Like we had the futurists or something, a collection of artists who explained the twentieth century to us. What kind of stories do we need to tell now?

Josh Zeman: Well, I think it's interesting; we we're talking inside and you mentioned that you had on the show the man who directed What The Bleep Do We Know!?

Host: No, it's one of the scientists from that.

Josh Zeman: One of the scientists, correct? And I thought that that was really an amazing, amazing film for me because here you have film doing something slightly different. It's not talking about reaching the plane of, for example, the American Dream. There it's about reaching some kind of both chemical and spiritual happiness, and that would be the dream. I thought that was really important because that's just not something that you would see put out by mainstream society. Yet, it was completely embraced, and the public is smarter than the mainstream media thinks. It's just that exchange: art verse commerce.

Michael Laitman: I think there's a lot of introspection in society these days. People are still searching for a way to escape, but they want to avoid this introspection, and they're afraid that, perhaps, the end result will not be in the favor of society. In other words, maybe society will discover that it's not so good, not so successful, not so well-accepted worldwide. So, we have a problem here in terms of telling a story. So I think that films, such as Joshua is making or What The Bleep... in other words, films from another direction. The public wants to acquire tools by which to approach life and examine it.