The most outstanding Q&A excerpts, examples, illustrations, definitions and advice from the daily Kabbalah lesson

Ascending Toward The Creator Along The Degrees Of Desire

A question I received: What is the goal of creation, and where are we on the spiritual ladder leading to this goal?

My Answer: The goal of creation is to reach adhesion with the Creator. Kabbalah uses various techniques in order to express the essence of categories and qualities of a concealed world that the reader does not perceive.

In order to discern the difference between the Creator and the creation, we say that the Creator is "above" and creation is "below" with regard to the importance of their qualities. We then measure the distance or height between them, although it is not a physical distance, but a difference of qualities, the degree of man's separation from the absolute Creator.

If a person does not have even one desire that is similar to the Creator (the quality of bestowal), then he hasn't reached even the first degree of the ladder between him and the Creator. If he has made at least a minimal portion of his desires similar to the Creator, then he ascends to the first degree. If he is able to use a greater portion of his desires for the sake of bestowal, then he ascends to the second level.

These "portions" are set for us from the beginning. They are precise and always differ from one another by ten Sefirot. Each time, I receive a strictly defined addition of desire, and by correcting my intention from reception to bestowal, I ascend. 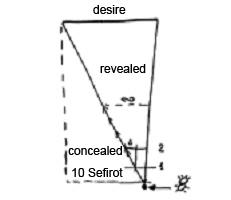 Eventually I will have to make the entire desire that was created in me similar to the Creator. However, this desire is presently concealed from me and becomes revealed to the degree that I am able to use it for the sake of bestowal. This is why the entire universe is divided into three worlds:

Everything takes place inside the one, common desire that was created by the Creator. There is nothing in existence besides this desire. Everything that is concealed and revealed constitutes one created desire. Therefore, that which is concealed from me today will become revealed to me tomorrow. And thus, one more part of reality will shift from being concealed to revealed.

Tips from the daily Kabbalah lesson are recommended, practical tasks for advancing spiritually

To Annul Myself Before Society

I am always situated opposite to the system that is capable of having an influence on me and that can bring me spiritual importance to the degree that I annul myself to them.

Otherwise I will not progress. I can sit for a hundred years in the company of Rashi and not grow because my admiration is not dependent on their growth, but to the extent that I open myself to receiving inspiration from them. Only to this degree will I switch over to a clarification of true and false instead of bitter and sweet. Otherwise my clarification is completely intellectual and not emotional.

From the Preparation to the Daily Kabbalah Lesson, (27 min)

Toil - the additional strength that I invest more than I did yesterday in clarification, correction, bestowal, connecting, studying, in everything. The extra desire to obtain something that is above our nature (the natural desire). The toil is measured according to the degree of acceleration only, and it must be a habit by me.

Increasing The Frequency Of Your Spiritual Movement

It is written that the entrance and exit of the Light in and out of the desire creates in the desire a recognition of the Light and Its Source. So how many times does the Light have to enter and exit my desire in order for me to start being conscious of myself, my state and my actions? And where is the beginning of my own desire, discernment, freedom of will and intention?

The Light's entrance and exit, and Its interchanging influences create a desire (Kli, vessel). The desire become more and more complex due to the various influences of the Light, and gradually starts to understand its own state. It begins to make its own decisions independently of the Light regarding how to desire It and how to aspire for It.

Spiritual life is evaluated by the frequency of the Light's entrance and exit in and out of the desire. It depends on the frequency with which a person evokes these actions, as well as how he tolerates and uses them.

This is similar to our material life, where the speed of things always increases. With the development of technology, the frequency used by devices increased from Hertz to Megahertz, and from long waves to radio waves and to lasers.

In spirituality, a person is like a device that is measured by the frequency of his movement, his "start - stop" intervals, or the Light's entrance and exit in and out of his desire. The more a person advances, the happier he is about the changes taking place within him and the more he knows how to use and control them.